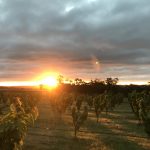 This year Tellurian Fruit Gardens is running it first ‘volunteer residency’, whereby we invite a willing participant to come and live on the farm and learn the ins and outs of growing fruit and running a farm business, plus some food sovereignty knowledge for good measure. Sam (whose family is in our CSA community) is the first to take on the position and this week he has shared some words about his journey this far.

I was recently asked by friends what my ideal house and location to live would be and I remembered that as a kid I had been asked a similar question and had answered, in so many words: an empty suburban block on which I would plant a forest of sorts, hiding my house far from the surrounding urbanity, my own private enclave. I was drawn to the possibility of the empty plots scattered around the inner north of Melbourne – a blank slate. This dream persists.

The decisions I have made since finishing high school have certainly been influenced by those musings. As a young adult I had become infatuated with the idea of honing my craft as a designer so that I would one day have the power to control the built and natural environments that surrounded me. Yet, at the same time, I was fully aware of a certain sad truth that it would take years to get to such a point; years moulded to my desk till the early hours, tending a sheet of paper and pen or, god forbid, my blue-lit computer screen, toiling at some long sought-after perfection.

The first few years of my undergraduate degree only confirmed this belief. I was finding it increasingly difficult to place myself in this world – it seemed as though all my friends, now in their early twenties, were beginning to find internships in their respective fields or were months away from post-graduate study and the real world. I could feel a tangible shift in the dynamic of my friendship groups as everyone started to prioritise life in the professional realm and the finality of adulthood, but my dream was no nearer to fruition.

So at the end of my second year of part-time study I decided to try something radically different. I was to be travelling around Europe with some friends and I had applied to WWOOF on a farm in Italy on a whim, with no expectations and no Italian language skills. I thought if nothing else the architecture would be beautiful. I found the Casa Delle Acqua through WWOOF Italia and hastily prepared an email explaining my desire to experience organic farming first-hand and how I looked forward to experiencing the rich Sicilian culture.

So I found myself on a mixed citrus orchard in the Simieto valley looking up at Mount Etna. I experienced a wistful month filled with incredible food and gratifying work that felt worlds away from any job I had ever had; it was also before 2020 really got started. My conversations back home were growing more and more urgent. Milan was going into lockdown and Italy would go on to become one of the first countries to be significantly hit by the coronavirus.

I flew home early and 2020 proceeded to crawl past. I started my first share house with some mates, trying as best we could to fabricate a semblance of freedom, and, simply for something to do more than anything else, I eventually planted my first vegetable garden on the cooch grass that was the entirety of our new backyard. But, like so many others, I was at an impasse. Online university became reality and Zoom all-encompassing. My morning ritual, or rather any spare moment, became the obsessive care of the few lettuces, spinach, kale and snow peas we had planted.

All the while I was dreaming of learning more about growing food, and perhaps more temptingly, of the taste of fruit eaten straight from the tree. I wanted to learn more about permaculture and the possibilities of agro-ecology, soil biology and food systems. But farming had never really been an option growing up in the city and, to make things worse, it seemed as though Melbourne had ground to a halt. So when my dad called me saying there was an opportunity to intern on an organic orchard in Central Victoria I dropped everything. This was what I had been dreaming about.

I grew up around gardeners. My parents studied Landscape Architecture and Botany among other things, so my childhood backyard was scattered with fruit trees and natives along with the occasional pumpkin or tomato plant self-seeding from our compost, a haphazard Eden of greenery. My Grandad is the quintessential urban gardener: pottering around all day in his backyard, much to the chagrin of my Nan – but there was always a seasonal abundance shared on their Sunday visits.

I had also been blessed with access to the outdoors and certainly took this for granted throughout 2020. I was clinging to the memories of camping trips to East Gippsland’s old growth forests or the overgrown block next-door to my Grandma’s beach house, building cubby houses and catching lizards. Or of the vast wealth of Victoria’s natural landscapes from the Grampians to the Hattah-Kulkyne National Park and Willson’s Promontory. These were rites of passage I had shared with friends and family – memories that were now in sharp contrast to life in lock-down.

So at the end of my third week living and working with the Harcourt Organic Farming Cooperative, I think I have finally found reconciliation between my childhood dream and the years up until now. Blessed with a view of Leanganook every morning and surrounded by paddocks of grass and market gardens and wild trees and row upon row of organic stone fruit. There are confrontations between life and death and stillness and machination and always a smiling face and cup of tea shared at smoko. This is a group of people dedicated to living well, sharing knowledge, and regenerating community, health and the natural environment – down to the microbe; and I am extremely grateful for their generosity in having me work and learn here. I have given up on perfection. I feel as though I am looking upon the first page of an encyclopaedic series of books on natural history, and I have just finished the first word and am filled with excitement at the possibilities of what more is to come.